Workshop for journalists and civil society organizations from Polog region 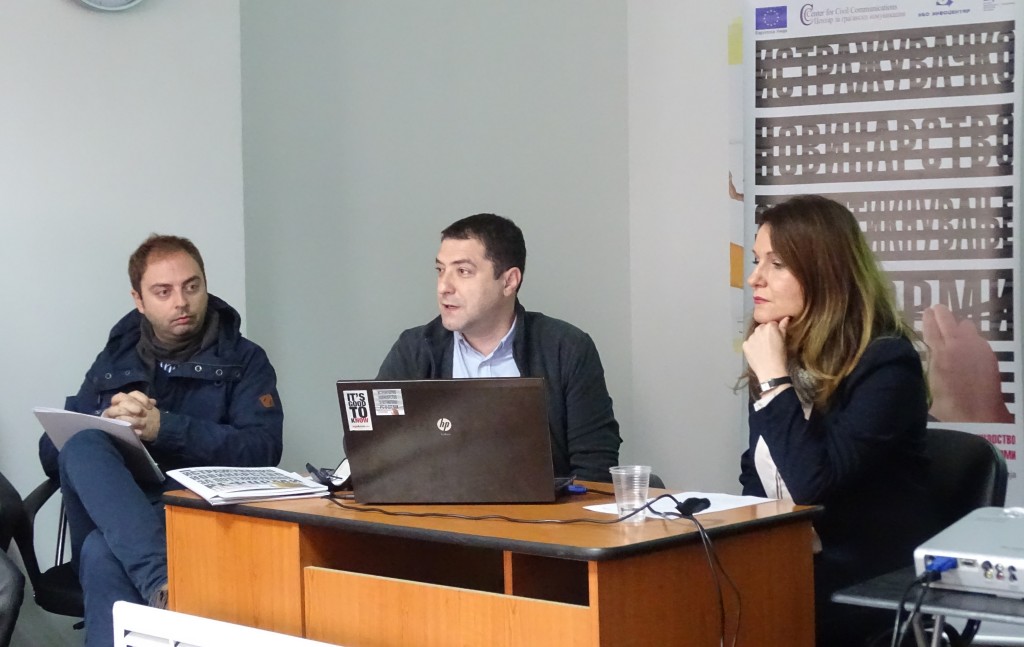 Center for Civil Communication, NGO Infocentre and BIRN Macedonia on November 14, 2016 in Tetovo organized a workshop for journalists and civil society organizations on subject “how to better researches and better cooperation?”
The workshop was opened by Sabina Fakic and German Filkov of Center for Civil Communications who spoke about the need for greater presence of investigative and analytical journalism in the media. 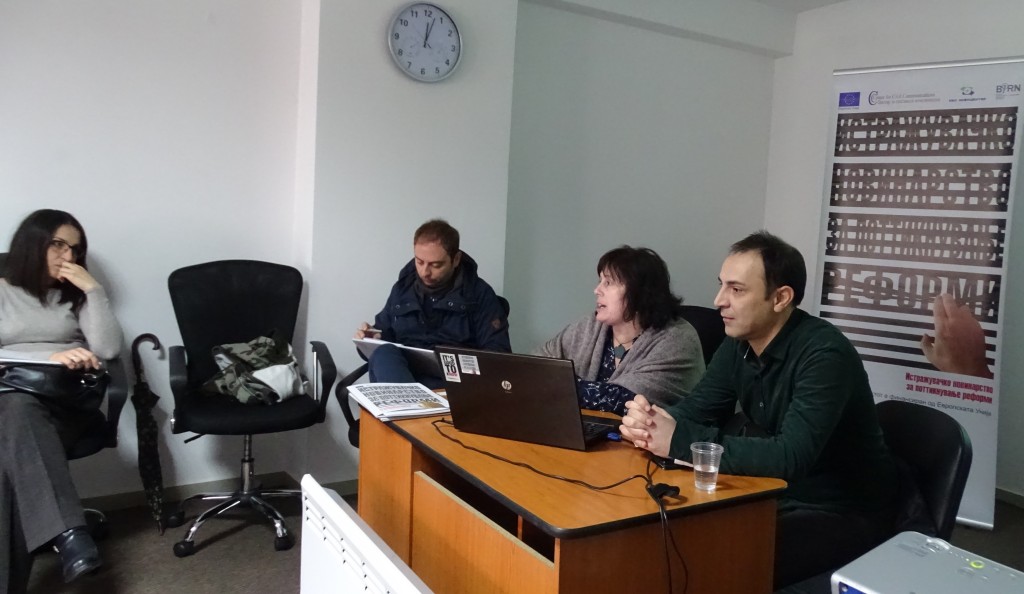 Biljana Bejkova of NGO Infocentre and Predrag Petrovic of A1 On talked about existing and ongoing initiatives and researches by the civil society organizations and the potential to be used for research and analytical articles by journalists. Riste Zmejkoski of BIRN Macedonia presented the existing experiences from the collaboration of journalists with NGOs and the importance of mutual cooperation.

The workshop was attended by more than 20 representatives of media and NGOs from the Polog region who together with the organizers exchanged experiences, information and knowledge and discussed the possibilities for better communication and cooperation between civil society organizations and journalists.
The workshop is part of the “Investigative reporting to boos reforms” supported by the European Union. 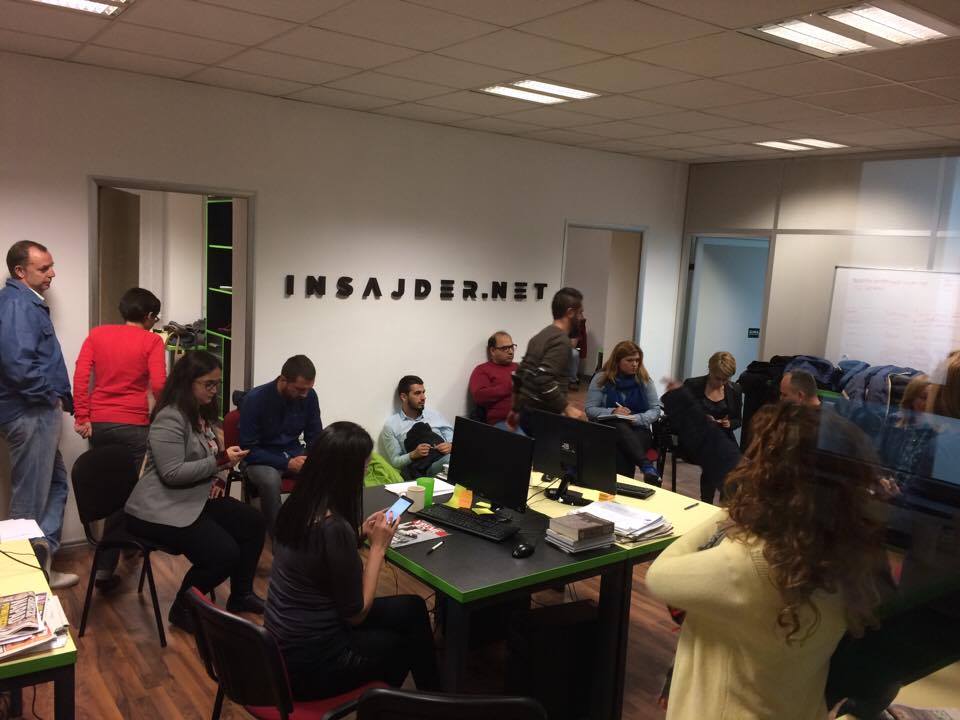 Belgrade, 19-22 October 2016 – A group of Macedonian journalists on a study visit in Serbia were introduces with the practices and experiences of their colleagues in order to improve the skills of investigative journalism.

The visit was organized within the project supported by the EU “Investigative reporting to boost reforms” and the group was composed of ten journalists from national TV channels, from print and online media in Macedonia.

The first day of the visit of Serbia was dedicated to the presentation of experiences of journalist newsrooms BIRN Serbia, KRIK and Insider.

At a meeting with BIRN the journalists from Macedonia discussed and exchanged experiences with Slobodan Georgiev, editor of BIRN Serbia editor Jelena Cosic editor of the regional research group within BIRN. At the meeting were discussed the difficulties and challenges in investigating corruption, the importance of adherence to professional standards as one of the pillars of the integrity of the investigative story, and the entire research team.

Georgiev talked about investigative journalism as an indicator of the level of democracy in a country. Jelena Cosic, an experienced investigative journalist and head of the BIRN summer school  shared with the journalists the experience of working on the story of a secret arms exports from the Balkans to the Middle East on how to build resources and access in situations where institutions are closed.

The meeting with representatives of the Crime and Corruption Network (KRIK), Stevan Dojčinović and Jelena Kalinic was devoted to the specifics of the work of this media organization dedicated primarily on investigating organized crime and corruption. 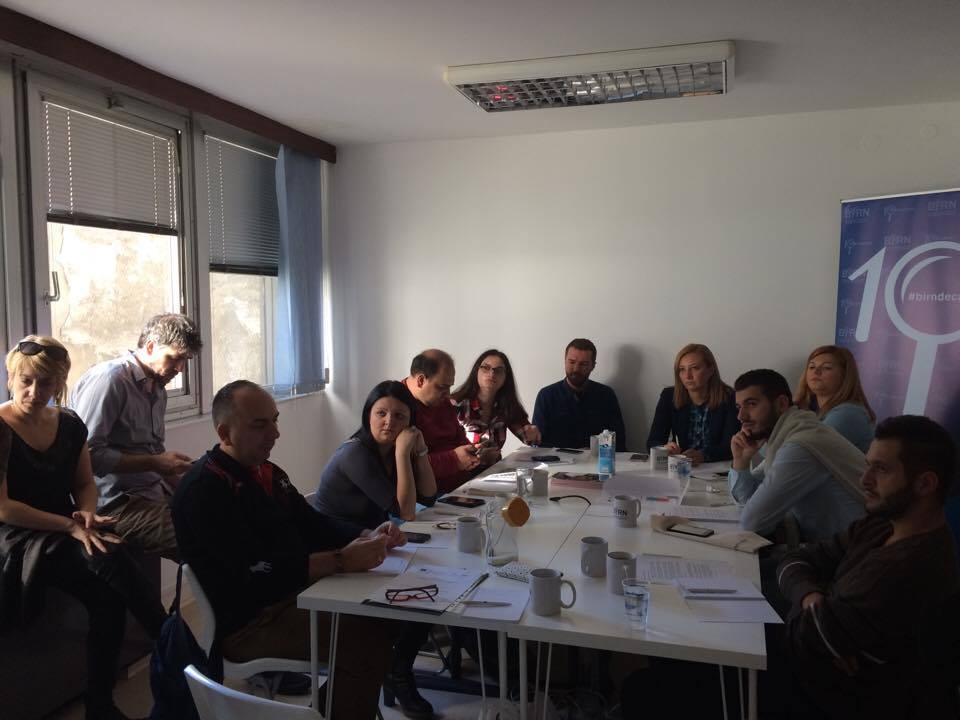 The third meeting was organized with the production team of Insider the most watched documentary-research program in the Balkans, which since last year has grown into an online medium as well. Their team leader the famous journalist Brankica Stankovic spoke about their work, methods and standards of her team who is behind the production of research serials. In that sense, she emphasized the importance for studious and in-depth research, methods of accessing and providing sources as well as the participants in the show.

The journalists from Macedonia met with representatives of the Center for Investigative Journalism of Serbia – CINS founded by the Independent Association of Journalists of Serbia in order to prove that independent journalism to the highest professional standards is possible in Serbia. The meeting was focused on the situation in the media in Serbia and Macedonia, of the criteria for choosing research topics and rule that the claims presented in the survey must be able to be relevant evidence in front of the Court. 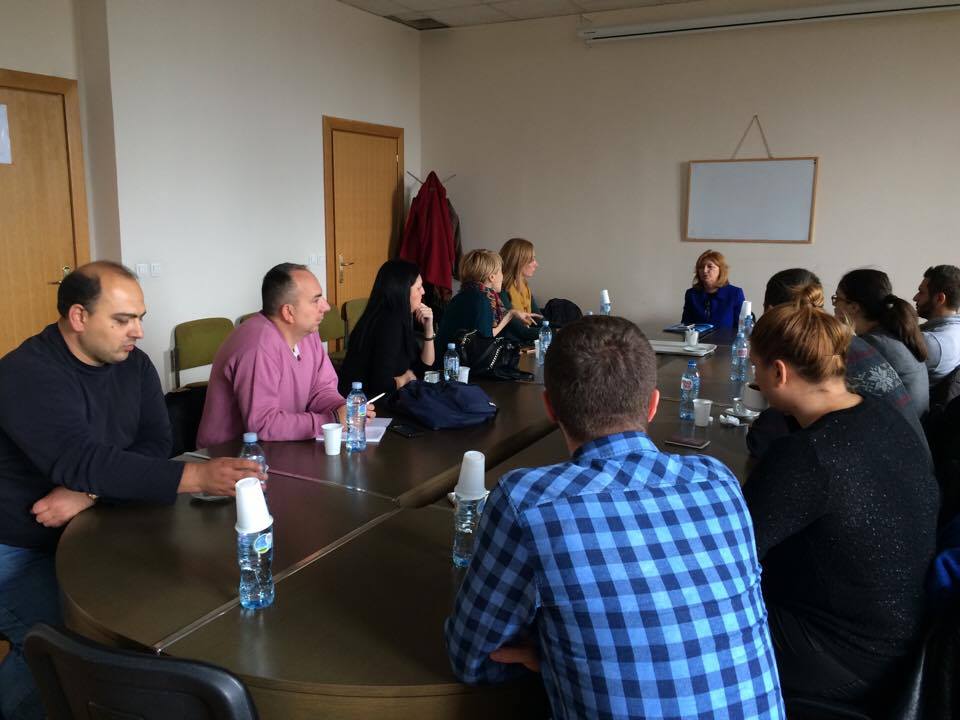 After that there was a meeting with the Deputy Commissioner for Information and Personal Data Protection, Stanojla Mandic. At the meeting with journalists from Macedonia Mandic spoke about the experience of their office which initially was not recognized as a controlling institution, about changing and improving the Law on Access which is one of the most liberal in the world. She noted that journalists and NGOs have been and still are a great ally in the fight for greater accountability and transparency of the institutions.
The working part of the study tour ended at the headquarters of the NGO Cher offering free legal and technical assistance to the media that are the target of cyber attacks.

Training for Investigative Journalism in the financial and economic reporting

From September 30 till October 2 in Ohrid was held training for investigative journalism in the financial and economic reporting. At the third training within the project supported by the EU “Investigative reporting to boost reforms” participated journalists from 10 media from the country.
Lecturers at the training were Pavle Gacov, the president of the Association of tax advisors and Krsto Nestorov, tax consultant and auditor. Subject of training were:
– financial analysis as a research tool,
– knowledge and understanding of financial events as a prerequisite for in-depth reporting,
– reading, understanding and analyzing the company’s financial reports,
taxes in total revenue of RM, the path from tax planning to tax evasion, taxes in the international business environment and opportunities for recognition and potential evasion
– cross-analysis of micro-economic categories.
In terms of practical work the journalists together with the lecturers analyzed the financial statements of companies and public enterprises, then tax revenues in the budget in a time series of 10 years and cross-analyzing macroeconomic categories (public debt, GDP growth and employment). 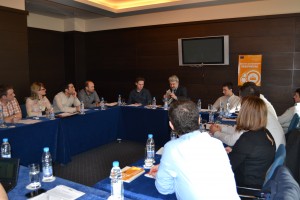 Attorney-at-law in the Access to Information Program in Sofia, Alexander Kashumov, encouraged Macedonian journalists to use more all the opportunities that are available through the Law to gain information from state institutions.

SKOPJE, March 14, 2013 – A group of Macedonian journalists were acquainted with the practices and experiences of their Bulgarian colleagues and experts on how to inform better the public through the application of the Law on Free Access to Public Information, during a three-day study visit to Bulgaria.

Attorney-at-law in the Access to Information Program in Sofia, Alexander Kashumov, who helps journalists in the exercise of this right, encouraged Macedonian journalists to use more all the opportunities that are available through the Law to gain information from state institutions.

Kashumov stressed that Bulgarian institutions nowadays publish lot of information that earlier journalists have been obtaining by submitting requests for access to public information. 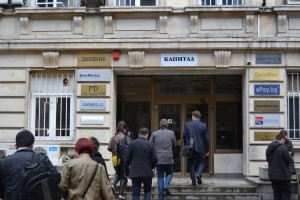 Policy Brief: Suggestions for amendments to the Law on Free Access to Public Information and for enhancing its application on the part of journalists 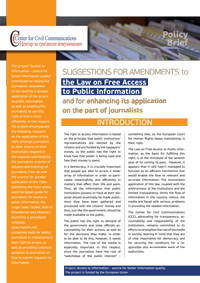 The right to access information is based on the principle that public institutions’ representatives are elected by the citizens and are funded by the taxpayers’ money, so the public has the right to know how that power is being used and how their money is spent.

In a democracy, it is crucially important that people are able to access a wider array of information in order to participate meaningfully and efficiently in matters that affect their life and work. Thus, all the information that public institutions possess or have at their disposal should essentially be made public, since they have been gathered and processed with the citizens’ money and thus, just like the government, should be made available to the public. 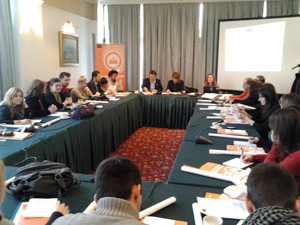 State institutions must become more transparent in their work and the decisions they take must be public, Center for Civic Communications (CCC) recommends.

The conclusions from the public debate CCC organized on February 1 are that changes of the Law for free approach to public information are needed because of  its inconsistent use followed by closed institutions and limited transparency. 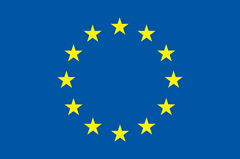